I daresay that there are very few people out there reading this who don’t know who Mario is. The lovable little American-Italian plumber is arguably the most iconic gaming character in history and polls suggest he’s even more famous than the cartoon figurehead Micky Mouse. But what do you really know about Mario? Probably a lot more than me, I’ve only played a handful of his games, but for those also lacking, here’s a brief history of the moustachioed star.

Despite being the mascot of Nintendo for as good as three decades, the famous Mario actually started out playing second fiddle as an unnamed character (titled only as ‘Jumpman’) in 1981’s ‘Donkey Kong’ and it wasn’t until a year later he became Mario (in ‘Donkey Kong Junior’ – the only game Mario has ever been an antagonist). 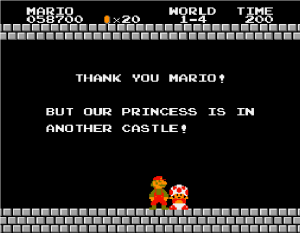 I have nightmares about this scene. I mean. Just. Another Castle…..

The Mario we know and love today came into being in the 1983 ‘Mario Bros’ which also introduced his long suffering younger brother Luigi. However it was 1985’s ‘Super Mario Bros’ that really expanded on the universe by introducing the Mushroom Kingdom and tasking Mario with saving Princess Toadstool. Today this single branch of the Mario series has sold more copies than any other complete games series.

Seriously though, there’s something fun about wandering around cleaning things. Note: This is not Mario with an ASBO.

The games led to numerous sequels and spin offs (such as the delightful Super Mario Sunshine which I played on the GameCube where you basically go around cleaning pollutants and graffiti) and there seems little the plucky little plumber can’t do – he’s even been to space. There is literally nothing Mario won’t do to save Princess Peach, especially if it means beating arch-nemesis (and serial kidnapper) Bowser or his childhood rival Wario.

Mario has also had several successful trips into Sport-themed games taking on both friend and foe on the race track in the phenomenal ‘Mario Kart’ series, clashing with Sonic (the megastar of Nintendo former-rival Sega) at both the Summer and Winter Olympics as well as knocking seven bells out of other famous gaming characters (ranging from Pokemon’s Pickachu to the lovable ‘Kirby’) in ‘Super Smash Bros’.  As well as being an award winning sportsman in his free time, jumping and plumbing are far from Mario’s only skills and over the years he’s also worked as a soldier, demolitionist, Doctor, Baker and President of Mario Toy Company. 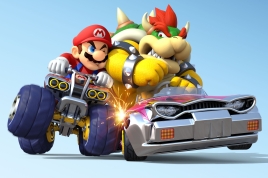 I have all the Gold cups for every track on Mario Kart Wii. It is a ridiculously fun game.

For a portly plumber, Mario doesn’t do too badly in the Olympics. Even against a Hedgehog well known for travelling incredibly quickly. Videogame logic.

Mario has been recognised as one of the most prolific characters in gaming. In 2009, the Guinness World Records found Mario had appeared in 116 distinct titles (not including remakes or re-releases) spanning every single year from 1981 until now (2014). According to Wikipedia, the Mario series of games is the best-selling of any game series with over 445,000,000 sold games; putting this in perspective, the next best-selling series is ‘Pokemon’ which has sold around 245,000,000 so it has a very healthy lead indeed. And all this is without even mentioning the comics, tv shows or film (yeah, FILM) in which he features.

And if you still don’t think Mario is cool, then you clearly don’t know he’s been on the side of lunch boxes for years. And that is the epitome of coolness. 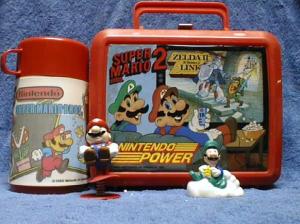 Post Script: Many thanks to Google for the images.

Post Post Script: I forgot to mention this in the actual article, but please have a moments silence for Luigi.

The Xbox One is an upcoming gaming console from Microsoft and is the successor to the Xbox 360. Announced yesterday, it is first in the line of Xbox consoles to feature a Blu-ray Disc drive, as well as 8 GB of unified memory and a 500 GB hard drive (although it’s unknown if this will be the basic model).

The Name
Now, I must admit, when I was discussing the console prior to the announcement, I was quite looking forward to the announcing of the Xbox Infinity. I’m not quite sure why Microsoft didn’t go with it; in my opinion it’s a considerable improvement on Xbox One. I understand where Microsoft is coming from mind you. I think the idea of an all in one console where you can flick from TV to gaming or the various other social aspects which the Xbox covers well is a pretty interesting concept. But I’ve also read people more knowledgeable than me saying the processing power which is going to be needed will either harm the gaming prospects of the console or increase the price.

Technology
Technically speaking, there is no denying that the Xbox will be a powerful console. And it’s going to be the introduction of Blu-ray into the Microsoft corner of the sales battle, which puts it on par with the PS4 (continuing on from the PS3). However there is no backwards compatibility with Xbox 360 games and this was a bit of a downer considering how it was included in the 360 for the original Xbox’s games.

I think the plan appears to be for Games and media to be stored in the cloud, so you’d need to connect to access them, and Microsoft wants users to be able to synchronise games between different devices, such as phones ect ect, which will only work if those products are online.

Kinect
The new Xbox will have a brand new Kinect to go with it. The device will come with the console, the microphone will always be on, and will need to be plugged in for the console to function. Not so sure about the fact that it will a) always have a microphone on and b) that it will be needed in order for the console to work. I just hope that it isn’t something which will be integrated into all gameplay. I’m not a fan of flailing my arms around while fleeing from a Super Mutant or sneaking around the city of Dunwall.

Price
Although no price has been announced, it is expected to be up to £399 and it is due to launch before the end of the year. With the Nintendo Wii U already on the market, and Sony’s Playstation4 in the pipeline, it’s looking like Microsoft and Sony will be going head to head in Christmas market (and as hopeful as I may be it will drive prices down, I doubt it will).

Overall?
Despite misgivings over the name, and the fact that is attempting to become a living room hub rather than a gaming console, I still think it looks quite nice. The 15 announced games upon release is something to be looked at with interest, especially since 8 of those are going to be new franchises. This is the Xbox doing what it does best; bringing the social aspect of gaming to the forefront.

Should more information be released, I’ll try and collate it into another post. Also, I hope to pick bits and pieces from E3 next month for more gaming news.

Also, I think the new remotes look really quite cool. Unlike the new PS4 one *shudders*